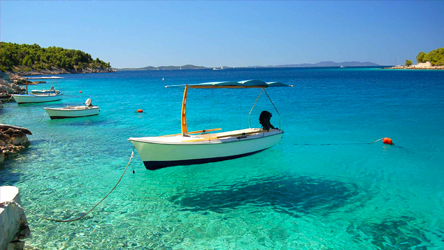 Recruiting celebrity faces to advertise holidays appears to be a growing trend in the travel industry, and one that has significant benefits. Thomson Holidays has experienced a surge in bookings after a recent TV advert – featuring footballer Jamie Redknapp and wife Louise cavorting around a resort – won the hearts and wallets of the British public. Award-wining tour operators Original Travel, however, have taken things one step further. Not only have they bagged a rock-star to front their latest campaign, but they’ve also gone into partnership with him to launch a brand-new music travel portfolio.

Dan Hipgrave, former guitarist of soft-rock sensation Toploader (best known for the hit ‘Dancing in the Moonlight’), has flung aside his plectrum in favour of co-promoting Love Music Travel: a new company that creates holidays specifically with music in mind.

“It was a concept that had been in my mind for some time,” Hipgrave tells CNTraveller.com. “Travel is part and parcel of being a professional musician. Toploader toured the world continuously for four or five years, and living out a bag became a way of life for me. After the band spilt up, I missed the travel element so I started writing for national publications focusing mainly on music travel. Both these experiences gave me the knowledge and became the platform for Love Music Travel.”

Original Travel has made good use of Hipgrave’s extensive industry knowledge to gain unique access to concierges made up of local music experts, professors and musicians, who have helped to design a number of holiday packages to encourage guests to explore a variety of musical cultures at destinations across the globe.

“Music is the local people’s lifeblood and needs to be witnessed in its indigenous environment to be fully appreciated,” Hipgrave continues. “Catching a blues performance in a ram-shackled hut deep in the Mississippi Delta or a genuine flamenco show in a bar down the back streets of Seville’s gypsy areas is the stuff that makes the hairs on your neck stand on end.”

From meeting the man who taught Elvis how to play the blues to feeling the Latino heat of the Havanan salsa, the company has a broad selection of international trips, festivals and concert packages, and are expecting to offer over 20 unique tours by the end of the year.

VIP packages to some of the world’s best music festivals and concerts – including the rock and pop Coachella Valley Music and Arts festival in Colorado, and even a tour across India to leading folk festival Judhpar Riff – will also be available, as will fast-track access to concerts, backstage passes, meetings with artists, and guestlist spots at a number of exclusive after-show events.