My journey to B.B. King’s hometown by Dan Hipgrave

Posted by lovemusictravel on October 22, 2008 No Comments on My journey to B.B. King’s hometown by Dan Hipgrave 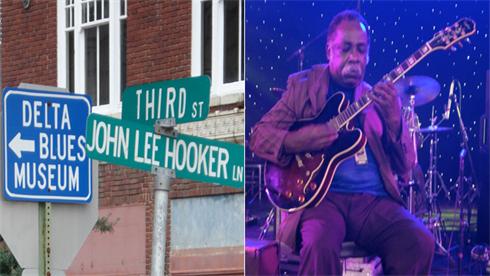 The sun shone brightly on the Mississippi Delta, fields of pretty white cotton were in bud and crop-dusting planes droned overhead but this was to be no ordinary day in the sleepy town of Indianola.

A gaggle of fans, including me, had gathered for the arrival of the town’s favourite son and celebrated bluesman, B.B. King, to open the £9 million new Museum and Delta Interpretive Centre bearing his name.He made his entrance smartly dressed in a dark suit and pork pie hat. ‘How are you feeling today?’ shouted a fan. B.B. answered: ‘I’ve heard that heaven is beautiful. If heaven is more beautiful than how I feel today, then I’m ready to go tomorrow.’ Clearly overwhelmed by the hysteria surrounding the day’s events, he continued elatedly: ‘It’s good to be home.’

At 83, B.B. King is still flying the flag for blues music. Of his age, he said: ‘I feel the same today as I would if I had a beautiful lady in my arms.’ But there was a definite self-acknowledgment that he is entering the winter of his epic musical journey.When one journalist asked how it felt ‘getting to play’ with the likes of Jimi Hendrix and Eric Clapton in the Sixties, B.B. answered jovially: ‘I don’t want to be a party pooper, boy, but I’m older than those guys – I think they got to play with me.’He is as prolific as ever. This year alone he has recorded and released a new album (One Kind Favor), played more than 100 shows around the world and still found time to endorse a museum he hopes ‘will educate people about the origin of blues music (let the people of the world know Mississippians are proud of it)’.Poignantly the B.B. King museum in downtown Indianola occupies an old cotton processing plant where B.B. worked as a boy – a reminder of his tough upbringing.For blues fans it provides the opportunity to connect with the roots where the music came from, for others it offers the chance to be converted as well as to learn how this special music shaped American history, its conscience, civil rights and human rights.As the happy crowd dispersed after the opening, I made a beeline towards my hero in the hope I could have a picture.
Without hesitation, the great man offered me one of his warm grins and waved me through, saying: ‘Hey, son, what you doing over there? Don’t just stand there, come over here, take my hand, let’s get that picture you want.’We spoke briefly on what a proud day it had been for him, then shook hands and I left, wondering where the self-obsessed ‘celebrities’ of today have gone wrong.B.B. King is the perfect gentleman, he’s been around for generations, defied the odds as a black man in a segregated America, inspired millions yet still manages to behave in a warm, personable manner – even apologising for his lack of education when answering questions from the fans.My journey to B.B. King’s hometown started in Memphis, where I joined Highway 61 – America’s blues highway, or Blues Alley as it’s often called – and drove the short distance to the Mississippi Delta.

Highway 61 runs south all the way to New Orleans but I was heading for the official gateway to the Mississippi Blues Trail in Tunica County.
Tunica was once the poorest county in America but the legalisation of casino gaming has allowed a tourist economy to flourish. I pulled up at the Gold Strike Casino Hotel situated on a small strip of towering, neon-lit resort buildings. It looked more like Reno than the Delta but it was a fun way to start the trip and the next day, slightly lighter in the pocket, I set off to find what had really drawn me here – the blues.

First stop was the Tunica Convention and Visitors Bureau, where helpful staff offered advice and maps for the trail. Here I met Dr Luther Brown, a local history professor at the Delta State University, who explained how the Mississippi Blues Commission was set up in 2003 to support blues initiatives and preserve the state’s musical heritage through such ventures as the 138 historical markers found along the Blues Trail.

These help visiting blues fans to find and understand the important landmarks across the Delta. The Blues Commission plans a further 100 markers as well as ‘virtual MP4 guides’ where video clips of artists and experts can be downloaded on to your laptop or iPod and watched at each marker.
Mississippi and the blues are synonymous. The long list of famous Delta bluesmen includes John Lee Hooker, Robert Johnson, Charley Patton, Ike Turner, Muddy Waters and, of course, B.B. King, but there is a force even greater than them all – the mighty Mississippi River.

I headed to the Tunica River-Park Museum to gain a better understanding of the importance this powerful, murky waterway has had on the community, ruling and shaping the Mississippi Delta for centuries.

The surrounding flat agricultural land is among the most fertile in the world but nature can be cruel. In 1927 America saw its most destructive river flood in history. Heavy rains pounded the central basin of the Mississippi, causing its levee system to break in 145 places and inundating 27,000 square miles up to a depth of 30ft.

Surprisingly only 246 people were killed but the devastation left in its wake affected the state’s economy for years. The black community, who bore the brunt of the destruction, relied on a music they called the blues to help them through the bad times.

It is a combination of mournful wails and drily humorous lyrics that developed from chants sung by slaves as they worked in the cotton fields. Today it is recognised as a major influence for generations of rock artists.

From Tunica I headed into the heart of the Delta to a small country town called Clarksdale. The Riverside Hotel is reason enough for stopping in town. This shack-like building was once Clarksdale’s black hospital but became a blues landmark when the ‘Empress of the Blues’, Bessie Smith, died there in 1937. It became a hotel in 1944 and paying guests have since included blues greats such as Sonny Boy Williamson and Robert Nighthawk.
At about £35 a night, some might say it’s a little modest (guests have to share a bathroom) but what it lacks in luxury it makes up for in history.

The owner, ‘Rat’, also adds spice to your stay. ‘I’m the caretaker, you own the business,’ he declared nonchalantly when I arrived. ‘It may be old but it’s clean,’ he cackled as he showed me a room that looked like a grandmother’s boudoir. Whether you stay or not, it’s worth a visit: you’d be hard pushed to find anywhere else with so much good old-fashioned southern hospitality and charm.

Clarksdale is home to the rather informative Delta Blues Museum that walks you through the ages of the blues with plenty of regalia and music. It’s also where you’ll find Madidi, the finest restaurant in the Delta, owned by Hollywood star Morgan Freeman, who grew up in the area. Unlike the naughty-but-nice staple Delta diet of fried catfish, Madidi offers a more refined menu including hybrid striped bass, duck and superb beef. The wine list isn’t bad either.

Down the road is another of Morgan Freeman’s business ventures, renowned blues haunt Ground Zero, where I ended the night supping beer, shooting pool and singing along to the blues with the friendly locals.

Next day, with a fuzzy head, I headed to Cleveland, listed as one of the top 100 small towns in America. It was a mild relief to be in a larger, more cosmopolitan place for the night with plenty of bars and restaurants to keep me entertained along the historic Cotton Row and Sharpe Avenue.
Legendary juke joint Po Monkey’s, on the outskirts of town, is open Thursday nights so I headed out there. The word juke originates from West Africa and means ‘wicked’ or ‘reckless’.

Historically juke joints were places where black farm workers would go to listen to music, dance and drink moonshine (illegally distilled alcohol) after a hard week’s work. Jukes also helped the blues to evolve, giving opportunities to travelling artists to showcase their material in front of an audience. Po Monkey’s is one of the last original joints standing.
The walls are cluttered with colourful posters advertising shows, funny toy monkeys and postcards from fans, the lighting is provided by candlelight and funky glitter balls and the live music is sensational.

Local bluesman Terry ‘Harmonica’ Bean delivered a footstamping performance while Po’s proprietor-by-night-farmer-by-day, William Seeber, entertained the crowd with his eccentric dancing – and by changing his bright suits every half-hour.

My journey to Indianola was almost complete but there was one more stop to make: Dockery Farms. This agricultural complex is said to be the birthplace of the blues since ‘the father of Delta Blues’, Charley Patton, once called it home. It is believed that Charley’s presence at this farm drove dozens of black musicians to the area, ultimately creating the music genre that we know as the blues.

When B.B. King was asked how it felt to be home that day in Indianola, he replied: ‘You can get the boy out of the country but you’ll never get the country out of the boy.’
I can’t imagine a world without blues music. I will always owe a great deal of debt to the bluesmen of the Delta – they are special people from a very special place.